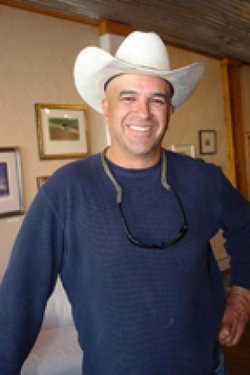 Joe’s junior and high school years were spent in Colorado Springs, Colorado. However, Joe’s love for his family ranch and the San Luis Valley meant that he spent his weekends, vacations and summers working with the land and attending to the families livestock in San Luis.

Joe was a 5th generation farmer/rancher. After he graduated from William Mitchell High School in Colorado Springs, Joe attended Colorado State University (“CSU”) in Fort Collins, where he graduated with a Bachelor of Science degree in mechanical engineering.

After graduating from CSU, he got a job as an engineer that took him to Texas, Louisiana, North Dakota, Wyoming, Ireland and Africa. While working as an engineer, Joe returned to San Luis to work on the family ranch on any break that he had. Joe’s love for the land, livestock, and family history were a constant draw to come home.

In 1986, Joe returned permanently to San Luis to work on the family ranch/farm. Joe wanted to ensure that the family legacy and local traditions continued to live on and be handed down from generation-to-generation. Joe’s passion for the land and water in the San Luis Valley, were the prime reasons he was an active community leader.

Joe worked with numerous local not-for-profit organizations, and served on several boards. He was a critical leader on many projects, one of the first being the strategist fighting a gold mine company from creating an open pit mine in San Luis and keeping the water clean. He also had a role in trying to stop deforestation on La Sierra.

As a County Commissioner, he was instrumental in building a bio-diesel plant in San Luis. In addition, he was critical to the building of a new Senior Center and the new Health and Social Services Center in San Luis. After the historical County Court House had been condemned, Joe successfully mounted efforts that resulted in its renovation that preserved an important part of Colorado’s history along with the preservation of a historical bridge.

As a County Commissioner, Joe always wanted the people to have open land available. As such, his leadership resulted in the County acquiring open space for its residents to enjoy. He led the acquisition of the Carpenter Ranch and his latest project was the procurement of Browny Hills west of San Luis and the acquisition of additional properties to develop the recreation opportunities of the Battenburg Greenbelt and Rito Seco Trail. Joe’s positive impact on Costilla County will impact residents for generations to come.

In addition to being a County Commissioner, Joe was a ditch rider, worked on numerous engineering projects, taught math to local students, and wrote many successful grant proposals that impacted Costilla County and its residents.

Joe’s passion was always protecting local history, water rights, open space, and small family farms and ranches. Joe sat on several boards including the Costilla County Commissioners Board, San Luis People’s Ditch, the Land Conservation Board, and he was the President of the Sangre de Cristo Acequia Association.